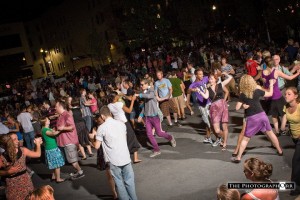 If you happen to follow me on Twitter (@mlstarner) or on Facebook, you probably notice that I’m often talking about swing dancing. Over the summer, a few folks at Journey and I decided to venture downtown Grand Rapids and check out the Grand Rapids Original Swing Society (or GROSS, for short). In the summer, they have swing dancing outside at one of the parks downtown. I had seen pictures on Facebook and I’ve always wanted to check it out, but never had the chance. We finally did and have been lovin’ it ever since!  It’s a blast to learn new dances (So far, we’ve learned East Coast Swing, Rumba, Cha-Cha-Cha, Waltz and a whole bunch of line dances) and to hang out with a very eclectic crowd.

I got thinking about it the other day that swing dancing, or just dancing in general, is a lot like our spiritual walk.