Sunday night wrapped up the final of the five-part series The Bible on the History Channel. It’s been an interesting ride the past few weeks. I didn’t know much about the series before about a month prior to the start of the series. We promoted it at Journey and even hosted live discussions and commentary on our Facebook and Twitter profiles.

One thing that stood out, especially at the beginning of the series, was how much they left out. Jon Acuff’s tweet during the episode a couple of weeks ago hit the nail on the head:

If #TheBible had every scene that folks on Twitter were complaining they left out, that show would be approximately 78 years long.

It’s true that for them to include all of the pages of scripture, the Bible would have been a multi-season series – lots and lots of hours. There were also some details that were off, such as the name of the king during Daniel and the lion’s den, and Paul not being referred to as “Saul” before his conversion (though I suspect that was to avoid confusion and simplify the story).

But there were some things that I was very happy to see – for instance, I was very pleased in the final episode to see the Lord’s Supper referred to several times after Jesus and to see baptism portrayed in a variety of ways from sprinkling to full immersion – and that adults and children were baptised.

In my mind, it seems like the team behind The Bible can look at their work as a success. I purchased the series on Blu-ray and noticed when I watched one of the disks the note at the beginning of each episode, which I hadn’t paid attention to before stating that they desired to stay true to the spirit of the book [the Bible].

From that perspective, I think in many ways they did. They portrayed the story of God’s people and His Son. While there were things that were left out that make us Christians cry for more or want to sit back and nit-pick (mostly to show off our wealth of Bible knowledge), if you look at it through the eyes of someone who doesn’t have a relationship with Christ, they kept just enough to introduce Jesus without beating them over the head with Scripture.

Plus, as we held our discussions online during the show, even seasoned Christians were asking questions, which forced me to dig deeper into the Bible to look for the answers – even if it was to try to find something they missed, it got me into the Bible, which is always a win in my book.

So, the question we’re left with now that it’s all over is… Now What?

What do we do with this series now that it’s over? Here’s a few suggestions:

1. Pray for those who were responsible for it and involved in its production. For those who were just actors looking for their next role, I hope and pray that their experience would lead them to know more about the people they were portraying and the story they were part of. For Mark Burnett and Roma Downey, I pray that they’re not finished – that the success of The Bible leads to more projects of similar caliber and scope so that more people will continue to be exposed to Jesus and hopefully be lead to learn more about Him and put their faith in Him.

2. Use it as a tool. This series will be aired again. And again. And again. It aired in five two-hour episodes the first time, but it’s designed to be ten one-hour episodes. Watch for it to be on again and encourage people to watch it. Talk about it – and not just to point out its flaws. One thing that we need to remember is that even though it’s not perfect, it contains the Word of God, which Isaiah 55:11 reminds us: 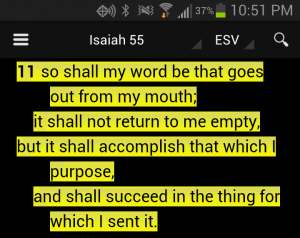 God’s Word won’t return empty or void, but it will accomplish its purpose. Add to that the wide audience it had and chances are good that many of the people you run into will have watched at least a portion of it. What a great opportunity to start a conversation about faith with those around us! And while the show had its shortcomings it’s worth remembering that the book is always better than the movie, and The Bible is no exception. (Don’t lead with that line though or you’ll just come off as a dorky Christian…)

3. Don’t forget about it. I don’t know about you, but I can have a really short attention-span at times. It’s easy to be excited about something one day and then forget it ever existed the next. We’ve been given a tremendous gift in this series. Reality is, none of us could have produced anything close to this on our own. This is an epic work in the true sense of the word. As such, we need to keep this resource close at hand and come back to it often. I’m already thinking that clips may get used in sermons and Bible studies down the road and that it could be a great way to introduce people to the Bible, especially those who have never cracked one open.

Let’s hope that the impact of The Bible goes well beyond these five Sunday nights and creates a desire in the hearts of many to see what the story behind the show is all about and that they might be introduced to the real Jesus, their Lord and Savior.

What did you think? Share your thoughts on the series in the comments below.

One thought on ““The Bible” is Over… Now What?”