This week we began a two-week series titled Mad Men. It’s not based off the show (although it’s definitely one of my favorites!) but instead is focused on the disciples, specifically after the resurrection. These men went from being locked behind closed doors and scared for their lives (John 20:19) to boldly proclaiming Christ in the streets, many even giving their lives as martyrs of the faith. What changed these men from cowards into mad men (“mad” in the “passionate” sense)? They fully devoted themselves to God’s call in their lives and they made advancing His kingdom their top priority. 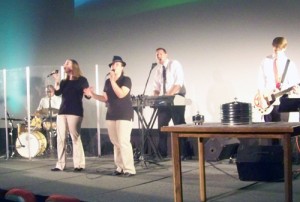 As a fun nod to the television show, all of us in the worship team dressed in quasi-sixties attire, including lots of skinny ties. It was fun and a nice change of how we usually dress for Sundays. We’ll do it again next week for the second and final week of the series too.

On to the service:

On a side note, it ended up being a Chris Tomlin week (3 of the 6 songs were written by him) and it was totally unintentional. I pick all the music thematically to go with the message or to perform a function in the service (like an Invocation or a Statement of Faith/Creed). I’m working on another post about more details of how we plan services and music, but I thought it was worth pointing out here. Actually, it wasn’t until I was typing up the bulletin on Thursday that I realized it  – and the music was laid out over a month ago! All together, it was a great first week of the fall at Journey and a great kick-off to a powerful message series.

Were you at Journey this week? I’d love to know what you thought! Share your thoughts in the comments below.

This blog is part of the Sunday Setlists Blog Carnival over at TheWorshipCommunity.com. Stop by and see what other churches were doing today!