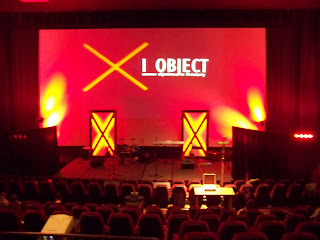 Title: “God is not Real”
We kicked off the series with the most common objection – that there is no God. We looked at some “evidence” for the existence of God, but even the best evidence only leads us to a vague, nebulous idea of a supreme creator. To really know God, we have to seek Him and He will reveal Himself as our personal God.

We started the message with a clip from an episode of House (House vs. God) where a teen-aged faith healer is sick. The clip showed House doubting the reality of God and frustrated with the idea of faith. In the message, we used a clip from Expelled, explaining the complexity of the cell and the information stored in our DNA. Information doesn’t come from nature. Pattern’s come from nature, information comes from intelligence.

Open up the Gates, Planetshakers

I Will Lift My Eyes, Bebo Norman

While the service went off without a hitch, there were certainly some gremlins working in the background. We added to our lighting setup this week, and it apparently pushed the electrical circuits at the theater over the limit and we began blowing breakers left and right. And of course, it couldn’t just take the lights, it had to take out the main projector and teleprompter and a half-dozen other things as well. We’re already working on a solution to the power problems for next week and should have it straightened around by then. The new setup was AMAZING and really helped to create the right mood. Can’t wait to see how the rest of the series unfolds!

While you’re at it, check out the Sunday Setlist blog carnival here.

Were you at Journey this week? I’d love to hear your comments!