For worship leaders today, we’re posed with an interesting dilemma. We’ve got access to literally thousands upon thousands of songs to choose from when we’re putting together worship services. Whether it’s songs from throughout the church’s history or new expressions of the faith – all in a variety of styles – how do we sort out the songs that are beneficial to our church and those that don’t measure up?

I’ve written about selecting worship songs before (here, here, here, and here), but just because the challenge isn’t new it doesn’t mean it’s necessarily any easier. 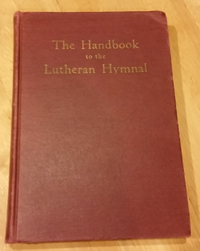 I’m a sucker for old worship books – not just hymnals but books about the topic of worship. A few weeks ago, I came across an old copy of The Handbook to the Lutheran Hymnal, written in 1942. It was on ebay for a song, so I picked up a copy. I grew up worshipping with The Lutheran Hymnal, and it’s still a favorite of mine that I use in my personal devotion and worship time along side of more modern music too.

The Handbook is a gem, as it offers history and background on all of the hymns in the hymnal. But what caught my attention was the brief preface and introduction. In the preface, the author shared their criteria for selecting songs. It could have been written for today:

As I read that definition, I began thinking about the songs that we use for worship and running them through that definition. We could debate about several things on the list – what makes for “good form” or “good church music,” but a couple of aspects are harder to debate.

Are the songs we use in worship “distinctively Christian”? There are many worship songs – from all eras – that fail in this area. It’s not that they’re ungodly or teach some false doctrine, though examples of those do exist. The problem is that they’re much too generic in their content.

As an example, it’s not uncommon for the song “God Bless America” to be sung in worship around Independence Day. I mean, it mentions God, for crying out loud! But do you know anything about who wrote the song? Irving Berlin – a Jewish man. Christianity and Judaism are not the same thing, especially because the Jews reject Jesus as the Savior of the world. However, lyrically, there’s nothing in “God Bless America” that couldn’t be sung by a Christian, Jew, or Muslim together. As such, it’s not a distinctively Christian song.

As I thought about their list of criteria, the other part that stood out and made me think about the songs I use was the intrinsic value of the content. In other words, is the lyrical content just fluff or is there some real substance to it?

10-20 years ago, there was a lot of music being written for the church that was really lyrically weak. Many of the “praise choruses” from years past fall into that category. Again, it’s not that they were heretical or even inappropriate. But that their content didn’t provide much in the way of value.

It’s not just new songs that are prone to this. An example given by the author of the Handbook is “Beautiful Isle of Somewhere,” which in the era when the book was written was a popular funeral hymn. While there’s nothing inappropriate in the song, it doesn’t provide much in the way of real value – or even hope, seeing as it’s a funeral song. It’s a pretty song. It’s got poetic lyrics. But as a worship song, it doesn’t provide much valuable content.

Looking through my own library of music, there are probably a few that approach the boundaries of those two requirements, especially the value of their lyrics. It’s good to every once in a while go through your church’s song library and evaluate your music – especially if you’re not exclusively using a hymnal.

Along with those two major points, the author of the Handbook offers a more thorough definition in the Introduction, p. IX:

“…must be a popular poetical expression of that which the believers have in common. It must be true, Biblical, Christian, edifying, simple yet dignified in language, excellent in content and form, devotional in tone, churchly and congregational in viewpoint and sentiment.

It must contain nothing that is untrue, questionable, unclear, uncouth, offensive. It must not be unrhythmical, humerous, sentimental, too imaginary, and too allegorical.”

What do you think? Do you agree with their criteria? How does your song library fit with those criterion? I’d love to hear your thoughts in the comments.

One thought on “Old Guidelines for New Worship”