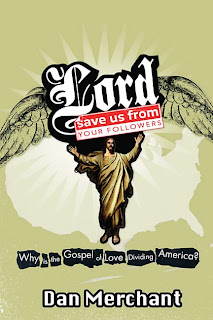 I just picked up an interesting book yesterday from the bookstore called “Lord Save Us From Your Followers”. It came out alongside a move by the same title in March of this year. I’m not sure why I hadn’t come across it before – I usually pick up on things like that through the blogosphere, but somehow missed it.

I’ve been tearing through the book – I’m already half done and will probably finish it tonight. It’s an easy read and I really like the style – very conversational and informal. In the book, Dan Merchant, the author sets out to ask the question “Why is the Gospel of Love dividing America?” Through interviews with people from all sides of the situation, he asks some really great questions and brings up some really great points.

Here’s an excerpt that really summarizes the main focus and problem as Merchant sees it:

Now, the big problem I have with people such as these is that I share their faith; they’re Christians and I’m a Christian. Deep in their being they have a love for the Creator and Savior, just like I do. We worship a god with the same name, we read the same Bible, and so simply to throw them under the bus would be an act of intellectual dishonesty. To be clear, I don’t understand why they’re saying and acting the way they are, because we share the same faith. That’s why I’m confused and a little wound up.”

He goes on to talk about several examples of notable Christians on television (Pat Robertson, Jerry Falwell and James Dobson, to name a few) who have, from time to time, said things that make the rest of us Christians, well, shudder.

The goal of the book and the movie are to encourage us to really stop and listen to ourselves and to open up dialog. So often, we behave as a “bumper sticker society” where we’re more than willing to share our opinion or view point but don’t care or even want to hear yours. (That’s from the book, I didn’t come up with it unfortunately) It’s really something that I get fired up about. I’ve become really sensitive over the last few years about how we [Christians/the Church] come across to those who have no inside connection or background with Christianity. We’re called to reach out and share God’s love with everyone. If we share it and they decide not to follow it, that’s their issue. But if they don’t even want to listen, that’s ours. We must first show the love that we want to share before they will be willing to hear about it. (OK, I’ll get off my soapbox now)

I’m really looking forward to finishing the book and I’m going to find the movie and check it out some time. I’d encourage you to check out their website too. You can catch a trailer for the movie, which sums up the book too.