Drums are a challenge wherever you worship for a variety of reasons: 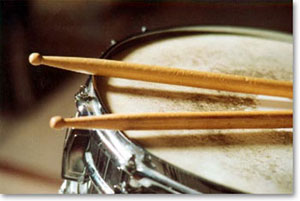 When we first started Journey, we were using an old hand-me-down acoustic drum set and it worked, but we lacked the proper drum mics to run it through the sound system, so we relied on the sound produced by the kit itself to fill the theater.

Then came the day we got a special gift that bought us our digital drums. [Cue the flashback music]  Hallelujah! No need to mic it – it all goes through the processor and comes out in just one channel (or two, but for some reason, one sounds better.). Setup isn’t much faster, but you only have to set up the drums, not the mics, so it saves you time! And it takes less space on the sound board and the stage! And they make no noise on their own, so we have total control of the sound! Oh man, we’re set now…

That setup worked quite well for us for over 2 years.  But lately, we’ve begun to hit some barriers with the digital drums.

We’ve decided that we’ve out grown the digital set here at Journey. Now, we’re not just jumping back to acoustic on Sunday. There’s a lot that we need to do to prepare for the transition.

All of the above costs money, and there’s none in the budget to do any of it this year.  However, it doesn’t mean that we’re not going to start working that way.  Back before Christmas, we ditched the digital snare for the acoustic one. A tad more flexibility, while only adding one more channel. In a couple weeks, we’re going to try adding the real cymbals. We’re using them at rehearsals right now to see how it goes and after just one week, there’s a noticeable difference!  Look for the change to happen sometime in the next couple weeks.

That might be all the farther we push it for now, giving us, as Amanda said at rehearsal this week, the “bionic drum set.” Since the cymbals and the snare and the parts that benefit from the flexibility acoustic offers, the others should work being digital. The key will be balancing the sound so it sounds like one unit, but in the end, we should have a better sound while keeping a slightly easier setup than the full-out acoustic.

One thought on “Drums and Portable Worship”