I had a request from a friend who is doing slides at his church asking for some guidelines and examples of how we do our slides. I looked around for some articles to send him and, finding none that were quite how we do it, figured I’d write him one. This one’s for you, Nathan!

Let me start off by saying that the reason that I couldn’t find an existing article that laid out how our slides are put together is not because we’re the only ones doing it right, but because every church is going to do it a little differently and that’s okay!

Generally speaking, if the lyrics are readable, easy to follow, and look good to your eye, then they’re probably already pretty good. But these steps may make them even better.

For the purposes of this article, I’m going to use the hymn A Mighty Fortress as an example.

Step One: Find your Font.

While I’ve seen some churches with great design staff successfully pull off using a different font for every song (or every line), most of the time it just looks tacky and is hard to follow. One good, sans serif font will work great. We currently use Open Sans. Arial, Helvetica, or Futura would be fine too. Above all, it should be easily readable. And for heaven’s sake NO COMIC SANS. Or Papyrus, for that matter.

Also, stick to one size between all of your slides. It’s hard on the eyes when one slide had giant text and the next you need to break out a magnifying glass. While I’ve seen different theories on what is the ideal font size (such as taking the age of your oldest attenders and dividing it in half – i.e. if your oldest are around eighty, your font should be no smaller than 40) it’s just easier to find a font size that you can read comfortably from the seats farthest away from the screen.

Step Two: Break Up the Lyrics.

Some songs make this really easy. Others are tricky.

The temptation is always to fit an entire verse or chorus on one slide. Sometimes that works but the majority of the time there’s just too many words and it makes it hard for your eye to track from line to line when there are 12 lines on a slide.

This is the opposite of a good slide.

First, the lyrics in the example slide aren’t laid out in a way that helps the singer follow along. Most of the time, it helps to have one musical phrase per line so the person singing has an idea of where to breathe or hold out a note. If you don’t know where the phrases are, listen to the recording and start a new line when the singer makes a longer pause or takes a breath.

Second, there are too many lines. My rule of thumb is no more than 5 lines per slide. 4 or less would be ideal. Give the lyrics space to breath and not take up the entire screen. (Disclaimer: this is a rule that can be broken from time to time depending on the song. If there’s six lines to a verse and it just doesn’t work musically to split them into two slides of 3 lines or one with 2 and one with 4, then you may have to do six. Just make it the exception and not the norm.) 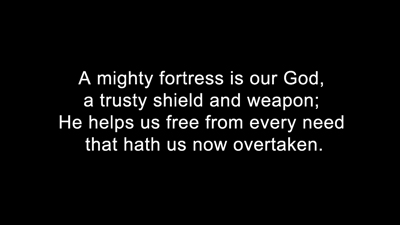 Ah, now we’re getting better! The phrases are obvious and there’s room for the text to breathe!

This will differ depending on your church. At Journey, we style our text by removing punctuation from the end of the line. The phrases are evident by the formatting, so commas, periods and semicolons just clutter the slide. Punctuation in the middle of a line, however can be helpful if there’s a slight pause or if there are repetitive words in a phrase. (Such as “holy, holy, holy”).

We also remove most of the capitalization. We capitalize all the names and references to God (including pronouns). I’ve see churches that ONLY capitalize God’s names, meaning they don’t capitalize “I” when it refers to the singer. Usually that’s to make a point, that we’re less important than God, but it can really look like an error to most people. We still capitalize “I.”

Also, unless there’s a legitimate reason to do otherwise, keep the text centered both vertically and horizontally. To me, it makes a cleaner look and it’s easier to follow.

Along with the technical style, add a light shadow to the text and a thin outline as well. This guards against a light spot in the background washing out the text. Also, stick to just one color of font. White text on a dark background is easy on the eyes and looks great too. 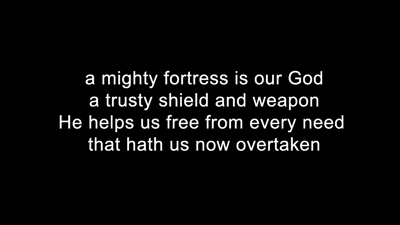 Again, this will vary wildly from one church to another. When I was at a more traditional church, I often took my own pictures of the many stained glass windows in the church from different angles, often focusing in on just a pane or two, and used them as the backgrounds so they fit in with the style of the service.

I’ve read articles of people advocating the use of just a solid color like black or blue as a background, which would make them definitely easy to read, but lacking in the visual engagement department.

We use mostly abstract colors and we use video loops instead of images. (Something that’s not easily done with entry-level programs like PowerPoint.)  Whatever you put behind your text, there are a few things to keep in mind:

We also have a rule that we don’t use the typical pictures people for some reason associate with worship: pictures of a person standing in a field or on a cliff with their arms up in the air. Seriously, who does that?!

For free graphics, Google image search is your best friend. Keep them high quality and simple. For paid pictures or motion loops, we get ours from WorshipHouseMedia.com. There’s always new stuff being added and their prices are reasonable. There are other subscription services out there, but I’ve found that it’s better to just purchase the ones you need from Worship House Media. Besides, pretty much all the subscription ones and more can usually be found there. 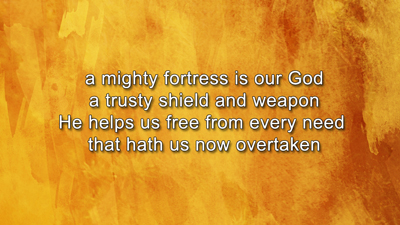 Now we’re there! You may notice that I’ve also added a very light outline and shadow to the text. I do this on every slide so that it pops off the background.

Hopefully you found this helpful! If you have other thoughts or your church does it different for some reason, share it in the comments below!